Some kick-butt protestors from Washington state came out today

From Tamira Thayne, on Day 5 of the protest at Olympic Animal Sanctuary, December 8th, 2013, in Forks Washington:

Today, Sunday December 8th, we were blessed to have the Cavalry show up in the form of six lovely ladies from close-ish Washington state, complete with awesome signage and, most impressively, a bullhorn. (Is that what those things are called? Megaphones?) Whatever it’s called, I loved it. 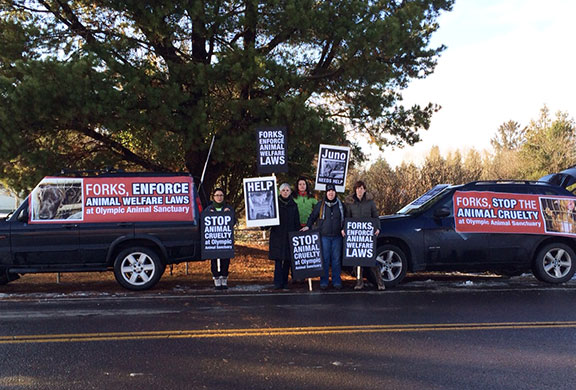 Ok, now these ladies were professionals! Makes Robin and I look like a couple of hacks…but our hearts are in the right place.

Nothing better on a cold day making change for the dogs at Olympic Animal Sanctuary at 1021 Russell Rd. in Forks, Washington. To see background of what’s been happening, visit our page at http://www.dogsdeservebetter.org/sonny.html.

We met up at the Thrifty Mart, and drove to the site together, Robin and I staying 500 feet back in the nosebleed seats due to our bogus restraining order—aka free speech impeder—while the six ladies drove up to our old spot and set up shop.

Look at Robin, chained up in the backyard, as in 500 ft. from all the protest action. See how far away they were? Like 1-2/3 football fields away!

Here’s a peek at how far we were from them…note how Robin looks so anxious to be part of it. We were like two dogs chained in the backyard all day, yearning to be part of the family, but shut off and wanting to get in.

I did get some shots of the cutest squirrel in existence, though…aw, look at that little darling. You can’t tell me he’s not just the most precious thing!

So, first, the ladies got set up and did some chanting, saying “Open the doors, Forks.” Then they did some talking round the neighborhood, which was really informative…and they judged how many thumbs up they got from passers-by and how many peeps gave them the finger. Turned out it was about 3 thumbs up to every middle finger, so that’s a positive sign.

Protestors takin’ it to the net!

Then, things got a little hairy for them when OAS Supporters showed up and got a little rowdy, or so we heard. Mostly we just said “I wonder what’s going on now?” to each other. Here’s where that bullhorn again came in mighty handy.

At this point neighbors near us came out and told us the yelling was stressing out the dogs and making them bark. What? So you don’t care if they die in there, as long as they’re quiet about it. Unbelievable.

The police were called, and since Markwell didn’t know their names, and they would only be there for one day, he wasn’t able to trot on out and get six more restraining orders. So police told supporters that the protestors are allowed to go right on up to the easement without being considered to be trespassing. So that’s what they did. 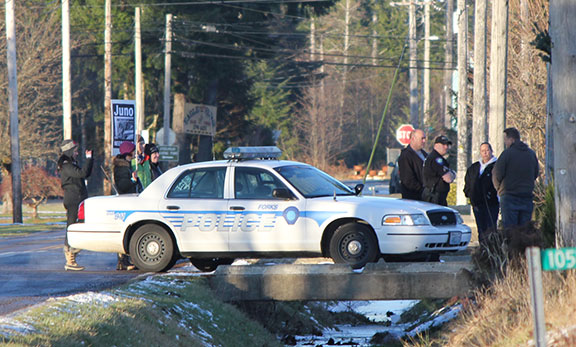 Police are called to solve a boundary dispute, or so we hear

Come on, you know this is the cutest squirrel EVER. I told him not to get too close to OAS, he might end up dinner or in a cage himself. But for now he is at least 500 ft. away, we know that for sure.

He just likes to pose. I think that squirrel is full of himself.

Once in awhile one or two of the ladies would take pity on us and come on down and tell us the latest haps. We were so excited to see them heading our way, just like a chained dog when he or she sees the master approaching with food. We’d wag our tails and beg for a morsel of news from the front. 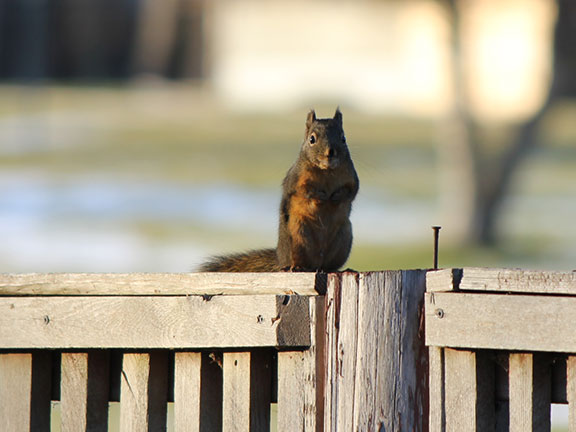 They actually saw someone enter the building today, the young man we were told worked there entered at 3:30. I’m not sure how long he was inside, but he was the ONLY one who went inside, despite there being 5-6 of them milling about outside at one point.

Once again, tell me how one person can take care of 120 dogs by wandering into work for just a couple hours at a time? Long story short, they can’t. Period.

Before they left they called the police and asked for a welfare check on the dogs due to the stench coming out the left side of the building. When the policeman asked to go inside, he was told “Come back with a warrant.”

Again, we say, what is being hidden inside OAS that NO ONE is allowed in?

If you haven’t yet seen the video of the dogs howling and my subsequent arrest for peacefully protesting, click here: https://www.youtube.com/watch?v=E3dobZuVeQE

When we got back to our room and I got online, I saw that our behaviorist from the Good Newz Rehab Center in Smithfield, Virginia (based in Vick’s former dogfighting compound) had tagged me on photos of some of our dogs she’d photographed today. I was so touched and blown away by the photos because of the contrast to the way dogs are living at OAS, in a frigid warehouse in tiny cages, without access to ANY of the niceties of life let alone the basic necessities.

The fact that we all have to fight SO hard to try to win them basic respect and rights to space, food, water, and exercise just rips my heart out.

I am exceedingly grateful to Amy and the wonderful staff at the Good Newz Rehab Center who do their very best for our dogs every day. To Mark, Jay, Michelle, Tim, Sherri, and Nicki, thank you from myself and the dogs of Dogs Deserve Better. Our dogs GET better because of your dedication to their welfare.

Eddie, who spent most of his life on a chain in Ohio.

Jules, just removed from a chain in Surry, VA this week. Look at her now, all gussied up!

Seriously, folks, I know we are all heartbroken and saddened over the fact that we seem to be getting nowhere fast for the dogs at OAS. But do NOT STOP. We CANNOT STOP, because we are the only voice these dogs have.

One thought on “The Protest Cavalry Arrives, and Meanwhile, Back in the Nosebleed Seats…”